The Biewer Terrier is setting a precedent as the first breed accepted into the AKC FSS through DNA science and not historical pedigree data. There is currently an agreement between the FCI and the AKC which applies to all breeds in both organizations and covers mutual recognition of registered pedigrees. There is some disagreement that says the agreement only applies to recognized breeds. Most people will agree it should apply to all breeds as the wording is not specific to exclude FSS breeds, nor does it specify that the agreement only applies to fully recognized breeds. The AKC’s general answer given is usually something along the lines of: “For the Biewer Terrier breed the AKC FSS only recognizes the Biewer Terrier Registry of America.” I encourage anyone who might be concerned about this to contact the AKC directly and start demanding a more specific answer. You can contact the AKC by emailing: FSS@AKC.ORG

The Mars Wisdom Panel test results have been applied to the Biewer Terrier to exclude dogs from the gene pool based on the purity results of their genetic pedigree. The Mars science is being applied to the breed in a manner which it was not designed for. This science should have been used to identify dogs to be included in the gene pool and as a tool to move forward hand-in-hand with other available sciences. Instead, this test along with the previously required B-Locus test has been used to exclude dozens of dogs over the last decade. This exclusionary practice has had a potentially irreparable deleterious effect on the Biewer Terrier in the United States. Mars itself has documented a steady decline in genetic diversity within the Biewer Terrier breed. Add to this that not all of the dogs that were initially registered by BTRA were Mars tested and we have an incomplete and biased application of the Mars science to our breed. I do also have an email from Mars stating that a Yorkshire Terrier result should be expected and accepted for several more generations.

There was a change to Biewer Terrier Registration policy posted by BTCA Director Gayle Pruett on April 6, 2018, that has raised some concern. The changing of BTRA registration rules without advanced notice is nothing new. The Biewer Terrier is a breed still in development and as such we should consider that some changes to the Biewer Terrier Registration might be a positive thing. We should also expect changes over time as the breed nears AKC status as a fully recognized breed. The frequency of unannounced changes is however unfortunate for our breed as it makes one question the validity of a registry which seems to have an arbitrary set of rules. As of this writing, BTRA currently does not have a registered business license that I have been able to find, nor is it listed under the Registrar’s own LLC umbrella as it once was. The BTRA website is currently owned and wholly controlled by BTCA Director Gayle Pruett. The BTCA has always claimed that BTRA was a separate entity and that registrations of Biewer Terriers are handled by an independent firm from the club. It can not be considered a separate entity if it is controlled by a BTCA Director.

Getting back to the AKC, the FSS and Miscellaneous move up policy has not changed. The wording on the FSS page has changed slightly to allow for a clarification to the rule. All Biewer Terriers with a full 3-generation pedigree from any recognized registry should be eligible to move to full status when the breed moves up.

You can find the list of AKC recognized registries here: https://www.akc.org/rules/special-registry-services/#foreign
It is not simply the BTRA dogs that should move up, as the AKC recognizes the FCI, and so every FCI registered Biewer with a 3-generation FCI pedigree should also move up. BTCA Director Gayle Pruett has issued a new BTRA mandate that any Biewer Terrier with a Yorkshire Terrier in the Mars Results will be issued a pedigree without the FCI registration numbers. The first problem is that BTRA pedigrees can sometimes be incomplete. The software that BTRA uses to process registration pedigrees has a known glitch that has never been corrected. This glitch causes the registration numbers to be dropped from the pedigree if the name of the dog exceeds a certain number of characters. The workaround for this glitch is to reduce the font size of the dog’s name so that there is more room on the line to include a registration number. The second problem with this new change to the Biewer Terrier Registration is that dozens of Biewer Terriers which tested as having a percentage of Yorkshire Terrier in their Mars results have already been registered and issued full pedigrees even while some 3-generation BTRA pedigrees have registration numbers missing. The third problem with this new change is that not all BTRA dogs are Mars tested. If you breed a pair of Biewer Terriers which tested as 100% it is still possible to produce a litter which could test as having a percentage of Yorkshire Terrier. What this BTRA change to the Biewer Terrier Registration Policy effectively does is put some Biewer Terriers at Generation 0, even while a littermate might be recognized with a full 3-generation pedigree. The dog at Generation 0 would not move up with its 100% littermate when the breed is finally moved to full recognition, even if those dogs had 3-generation FCI pedigrees already. This effectively makes those dogs less desirable in the eyes of some breeders and may result in the continued decline of genetic diversity as such dogs are selected out and not bred.

Our collective desire to see the Biewer Terrier advance into full recognition with the AKC should not be allowed to outstrip the sound development of the breed. The extremely limited genetic diversity in the Biewer Terrier could prove to be insurmountable if the breed population continues to be managed by people that are only interested in furthering the personal agenda of a single individual 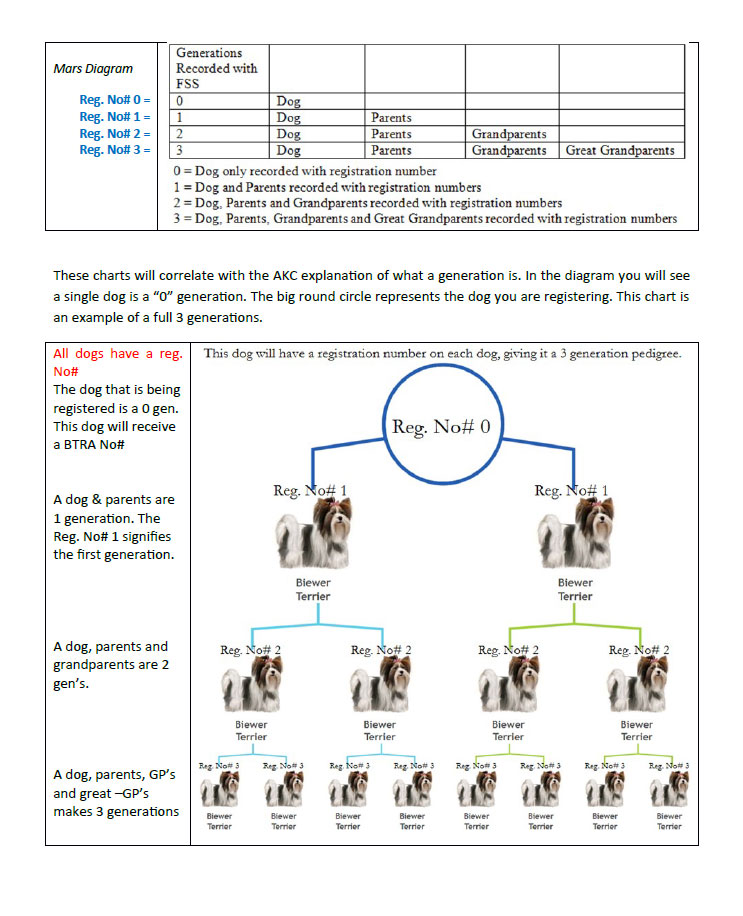 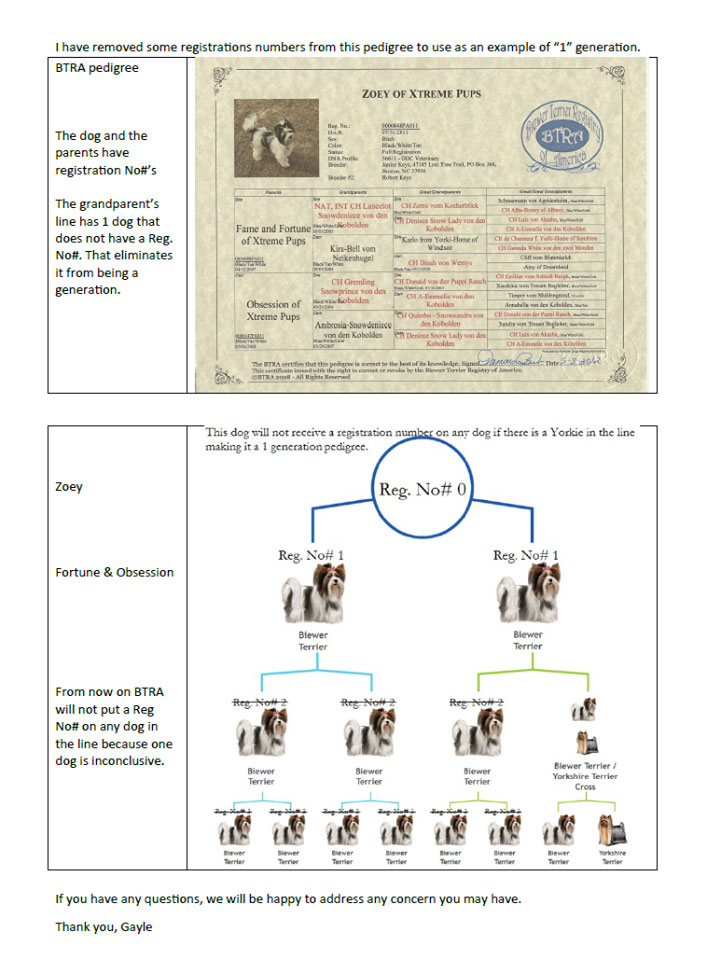