Unlike other American Biewer Terrier breeding programs, the RMBT foundation program is based exclusively on imported lines. All our foundation Biewers have been imported from Ukraine, Russia, Belarus, Lithuania, and Latvia. There are many reasons that led us to not include any American bred Biewers to our Breeding program.
We often get questioned about why we are not a member of the Biewer Terrier parent club, BTCA, and why we have imported so many dogs in the development of our breeding program. Many of the first Biewer Terriers that were brought into the USA came from the German Biewer Yorkshire Terrier Kennel “Von den Kobolden”, which translates to “From the Kobolds”. I was born and raised in Germany and moved to Colorado in 2012. I speak German much better than English and contacted Manuela Glaßer, the owner of the “Von den Kobolden” Kennel in Germany to learn more about her specific line of Biewer Terriers as it appeared that many American breeders had been inbreeding on those dogs and the offspring was advertised for sale by members of the Biewer Terrier Club of America. Talking with Manuela in Germany, I learned that in 2005 and the following years, about 80-90 German Biewer Yorkshire Terriers “Von den Kobolden” were purchased by the founder of the BTCA, Gayle Pruett and resold to other BTCA members. According to Manuela Glaßer (the breeder), these puppies were sired by only 3 different related males and were sold as pets to promote the breed to pet homes, but were then resold with BTRA registration papers to BTCA members for breeding. According to the BTCA website, the BTRA (Biewer Terrier Registry of America was also founded by Gayle Pruett (former BTCA President) and her friend Myrna Torres (current BTCA President), and Ilona Shanklin.

Pictured below are 2 Biewer Terriers that were bred from that line by Gayle Pruett, founder, and former President, now Vice President of the BTCA. 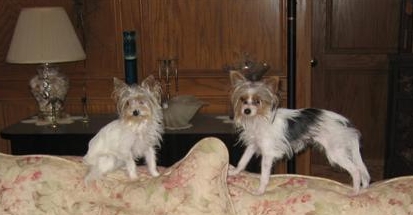 Breeder: Gayle Pruett - Founder and board member of the Biewer Terrier Club of America 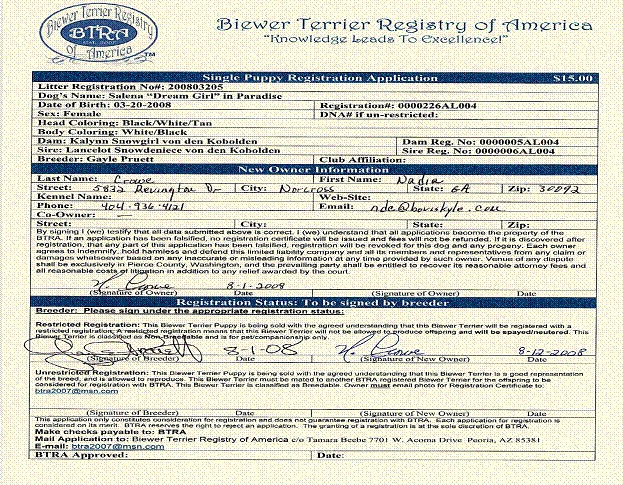 Pedigree of the Biewer Terrier Registry of America, established by Gayle Pruett & Co-Founders of the BTCA 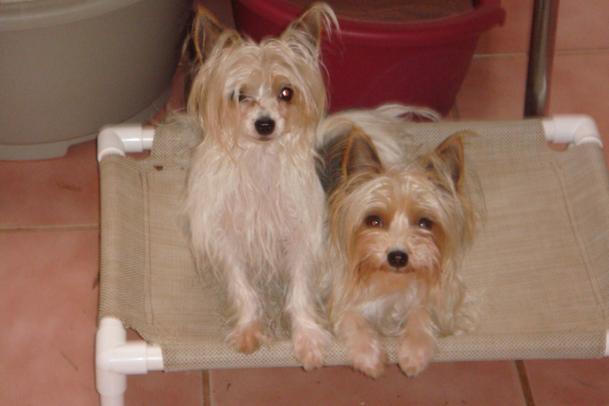 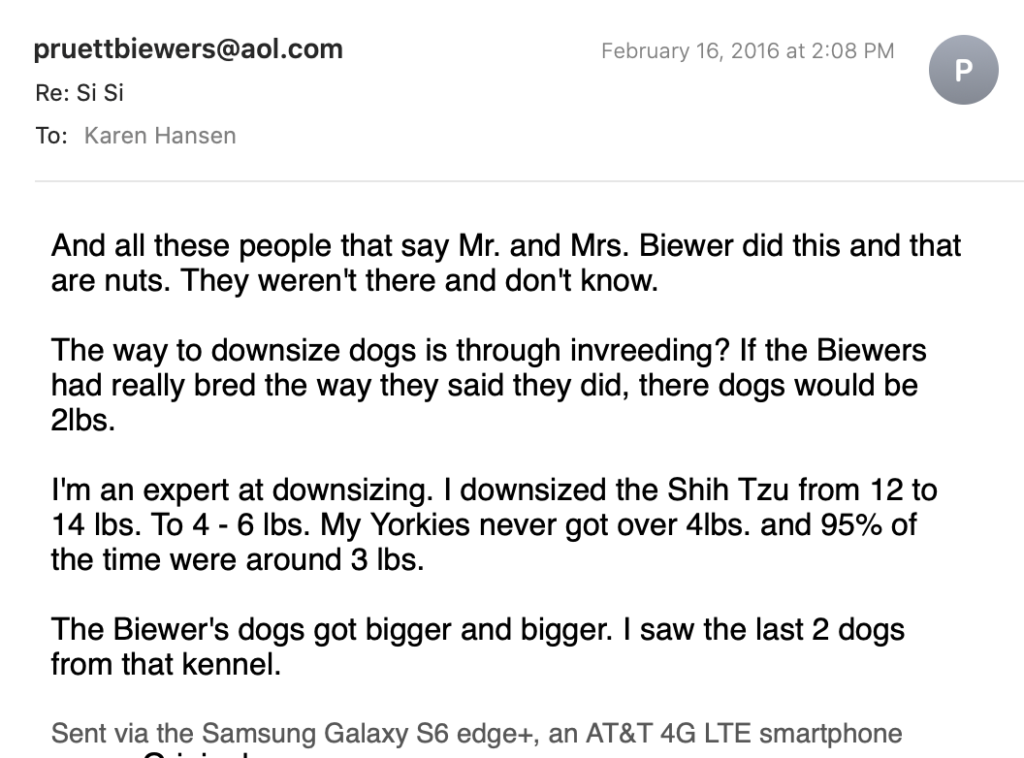 Melanie LaPoint, former BTCA Health Committee Chair, had been researching some serious health issues behind certain BTRA lines and recommended avoiding them if possible. She also mentioned her concerns about the lack of genetic diversity, which means that the American dogs are all very inbred due to the common sires. Until the end of 2018, the parent club had a very unique pre-registration procedure that required all non-BTRA Biewers to submit to a breed detection test which further bottlenecked the American population for the Biewer Terrier Breed for over 10 years. Many potentially valuable breeding Biewers were denied BTRA registration which in turn eliminated them from being AKC eligible. Talking to Gayle Pruett directly, I learned that she preferred very small dogs and would achieve “teacup size Biewers” by inbreeding. Gayle Pruett was a breeder of Imperial Shih Tzus and Yorkshire Terriers and called herself the “Expert of Downsizing”. Gayle explained to me that she downsized her Shih Tzu line from 12 to 14 lbs. To 4 – 6 lbs and that 95% of her Yorkshire Terriers were around 3lb. If you read the breed standard for Yorkies and Shih Tzu, you will see that these breeding practices are contrary to the corresponding breed standards, and thus not ethical – another reason not to include the early American Biewer lines into our breeding program.

Before the Biewer Terrier was added to the AKC Foundation Stock Service, several of the Biewer Terriers, owned by BTCA founders have been showing in different show venues and Gayle Pruett and Myrna Torres issued fraudulent Champion Titles, using the IABCA Champion Dimplom and the IABCA Logo. Gayle Pruett has been banned for life from exhibiting or registering her dogs, including co-owned dogs with the International All Breed Canine Association of America (IABCA). 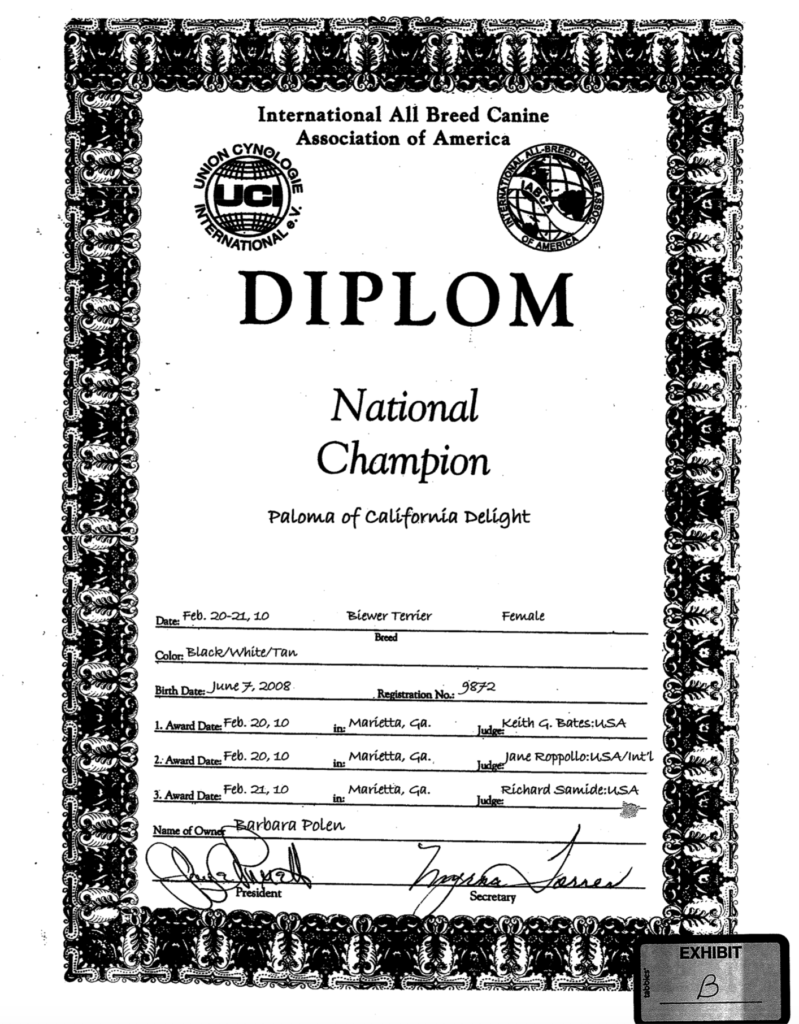 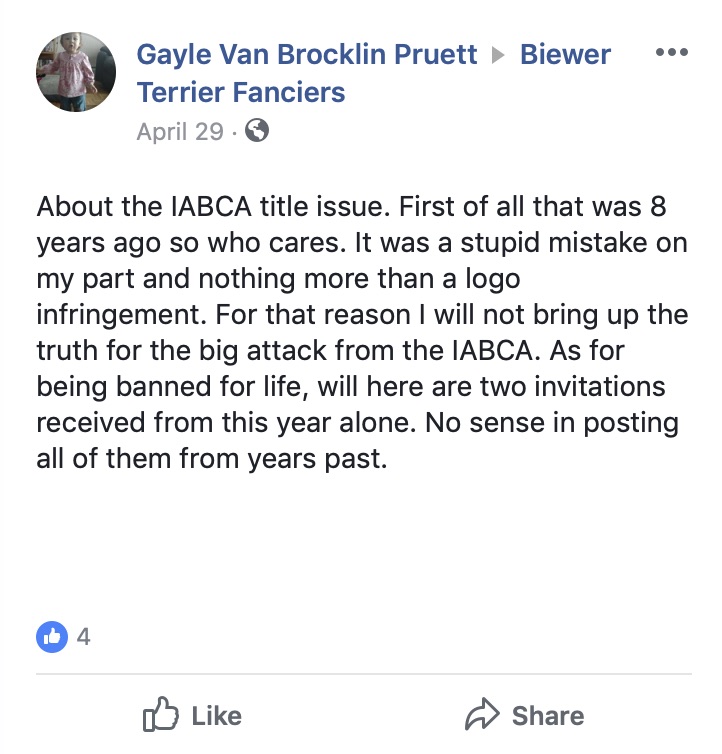 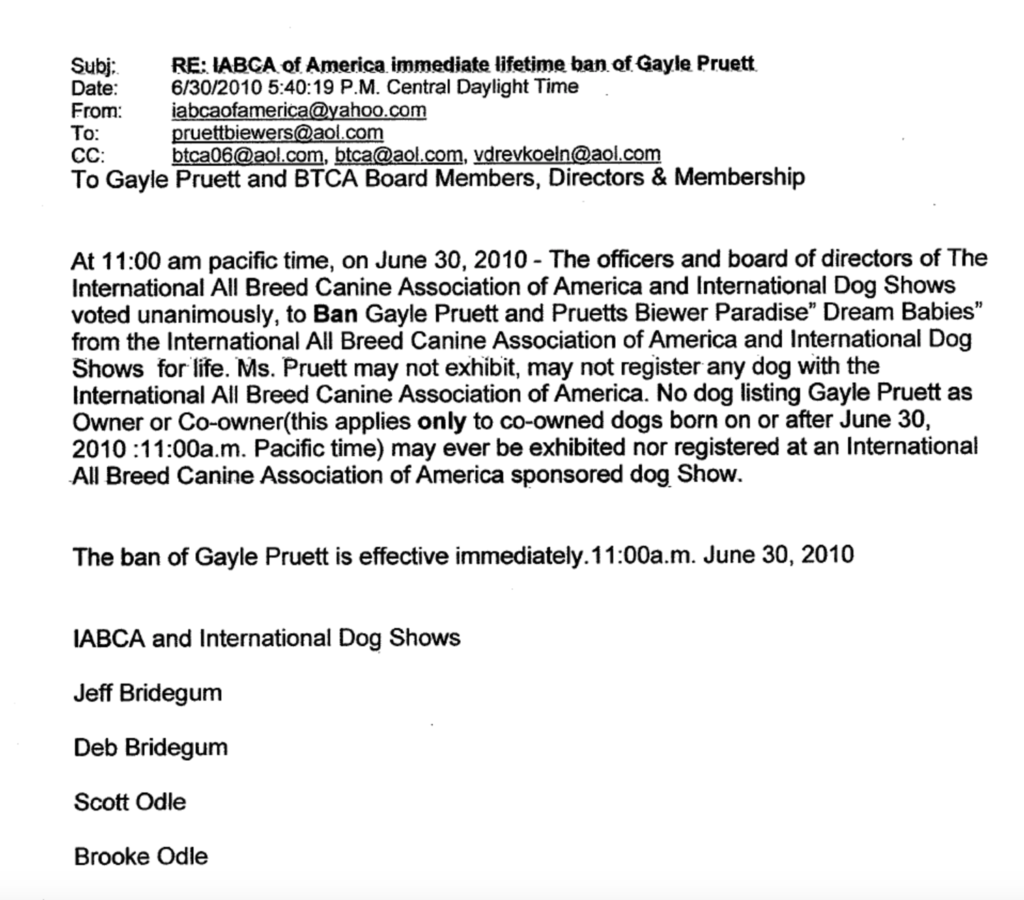 Email from IABCA, banning Gayle Pruett and her Kennel for life from exhibiting, registering any dog (including co-owned dogs) with the International All Breed Canine Association of America. 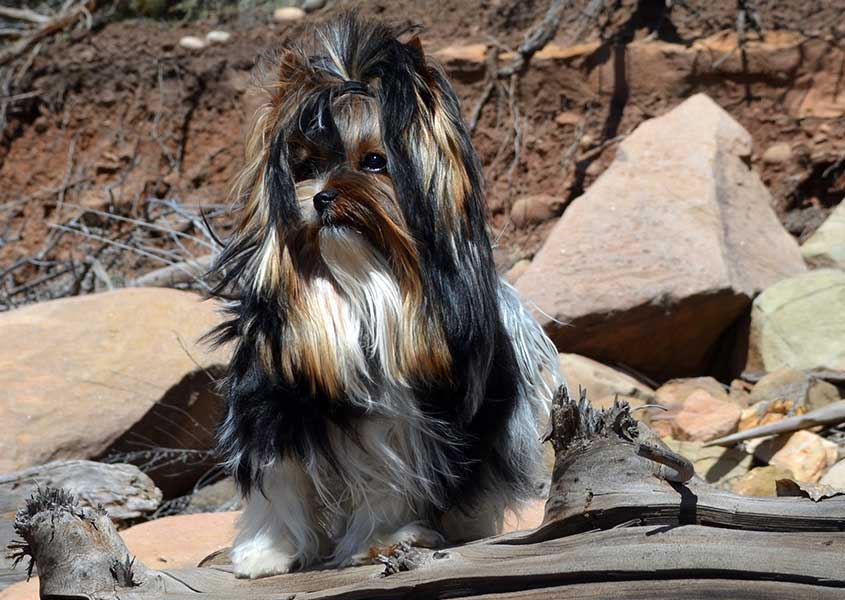 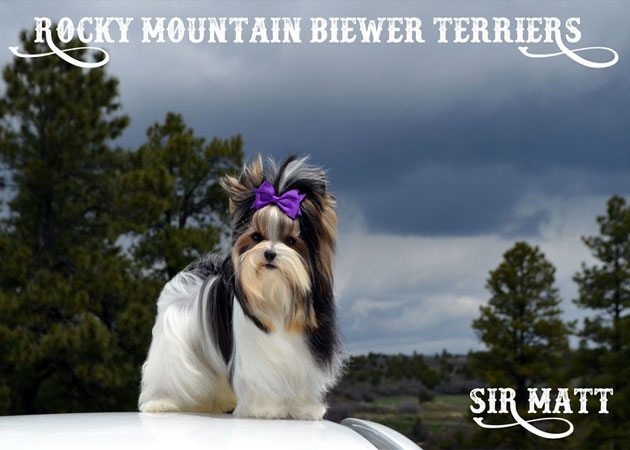 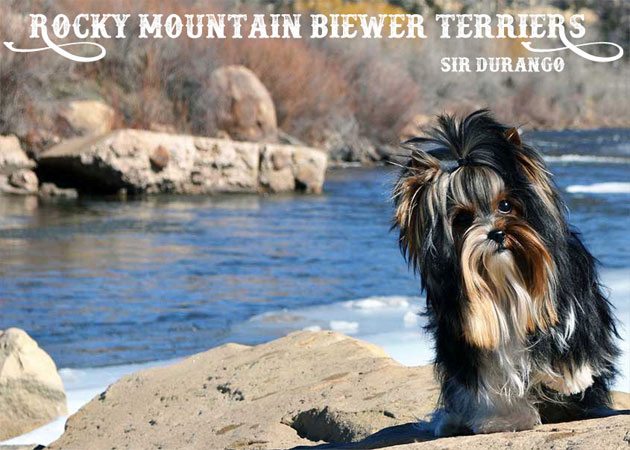 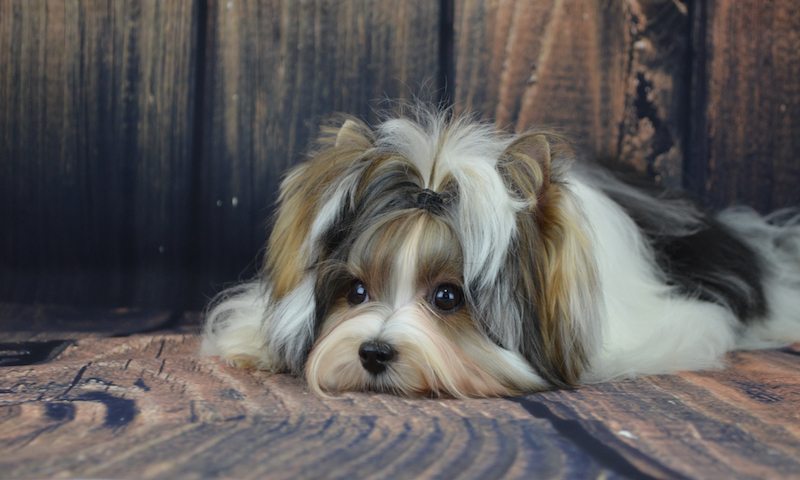 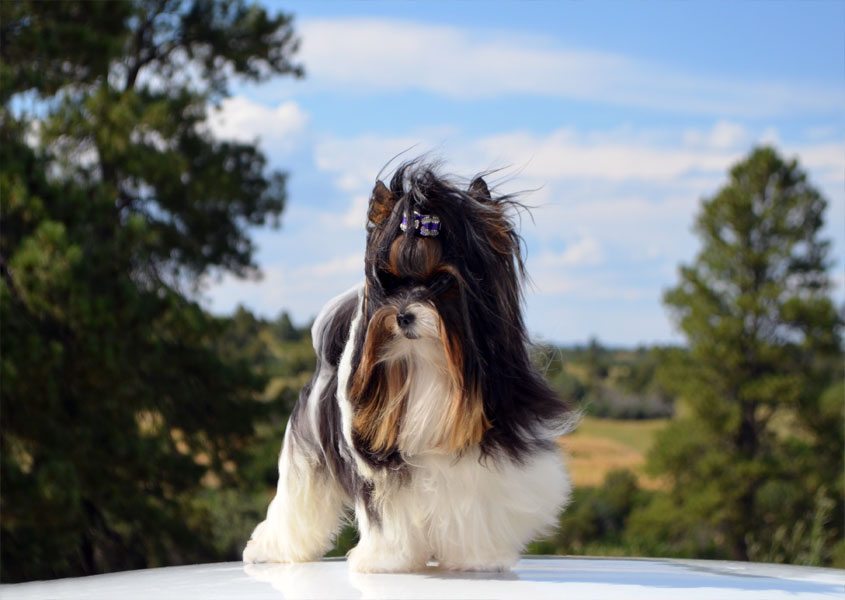 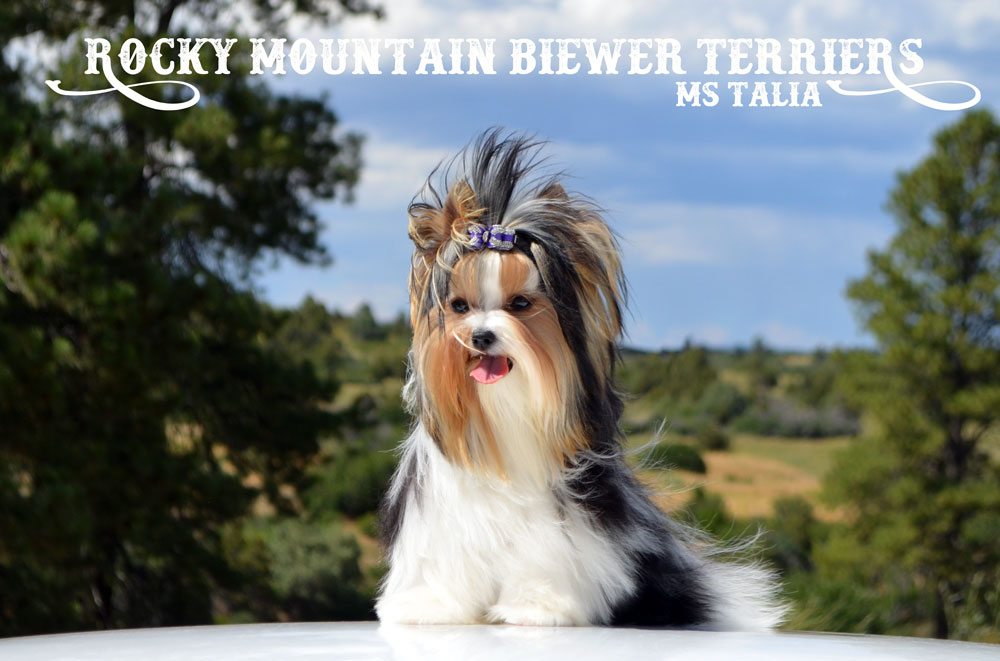 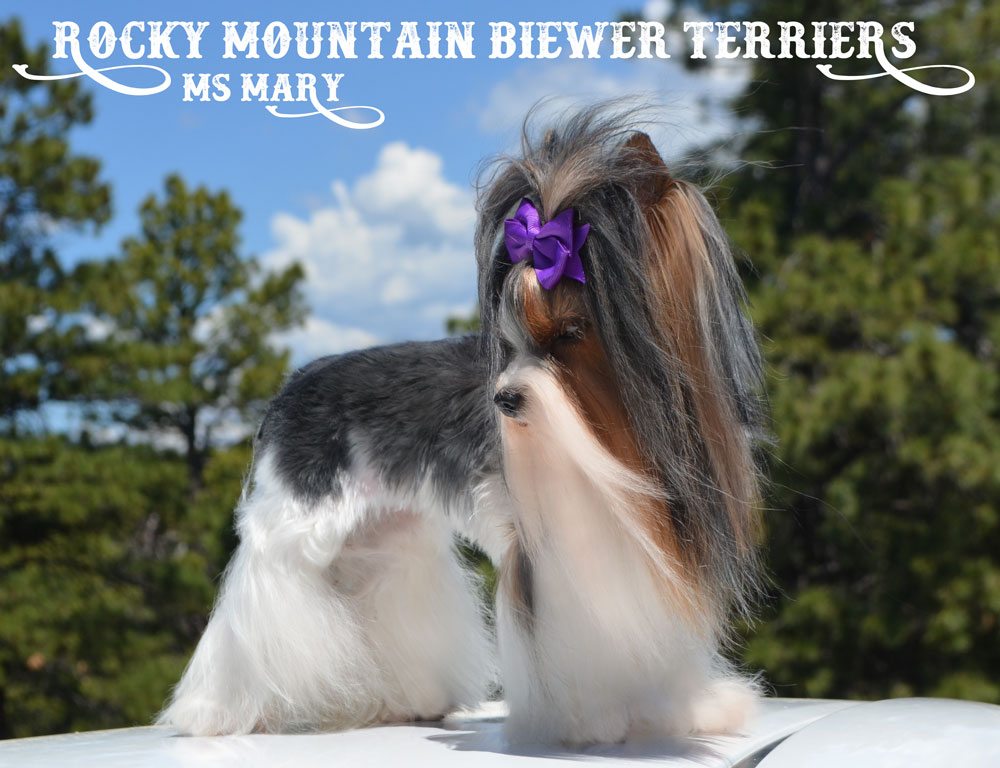 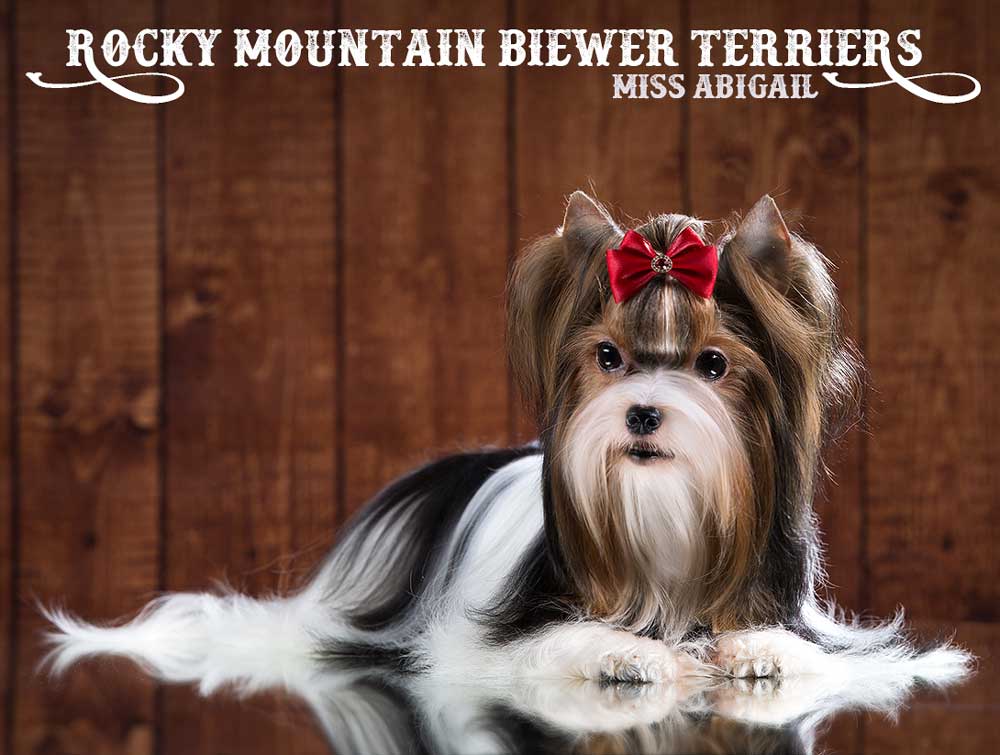 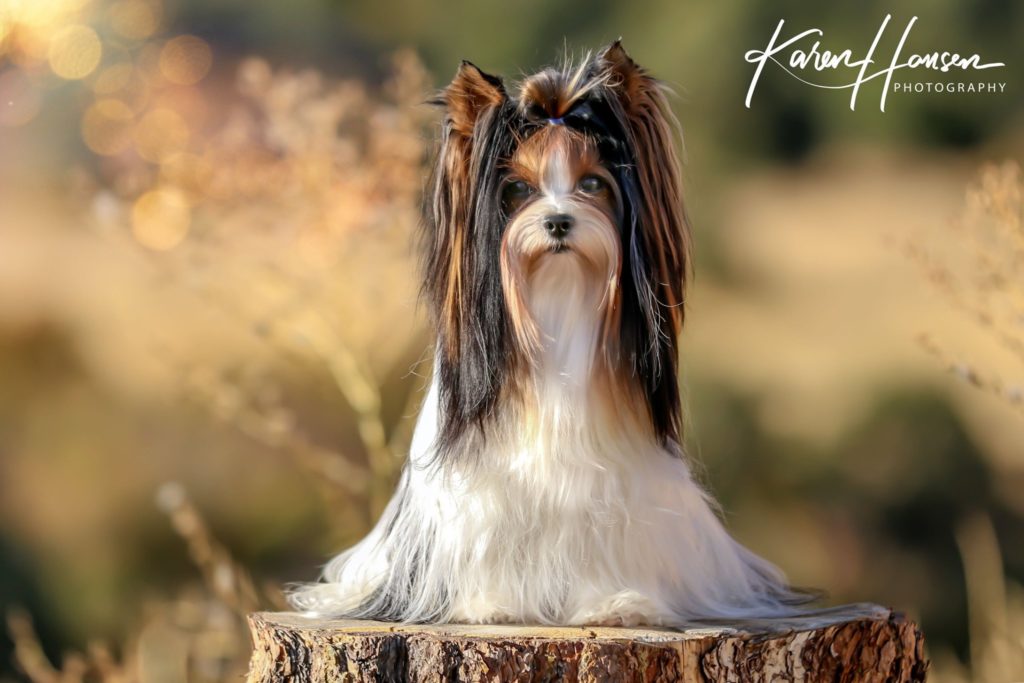 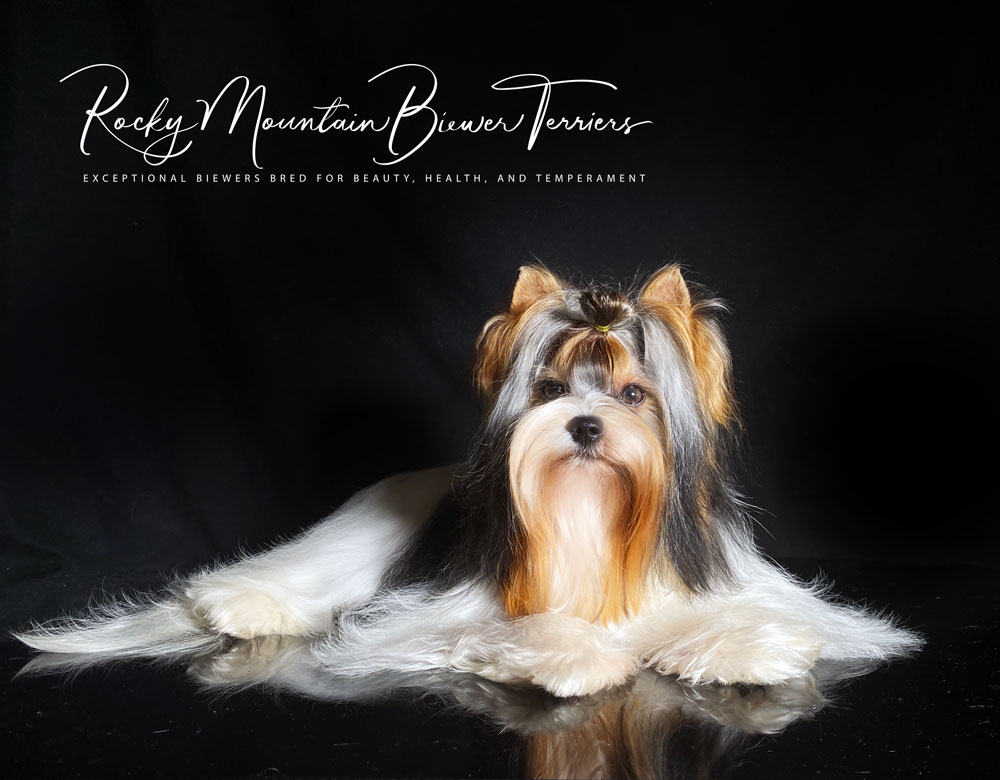 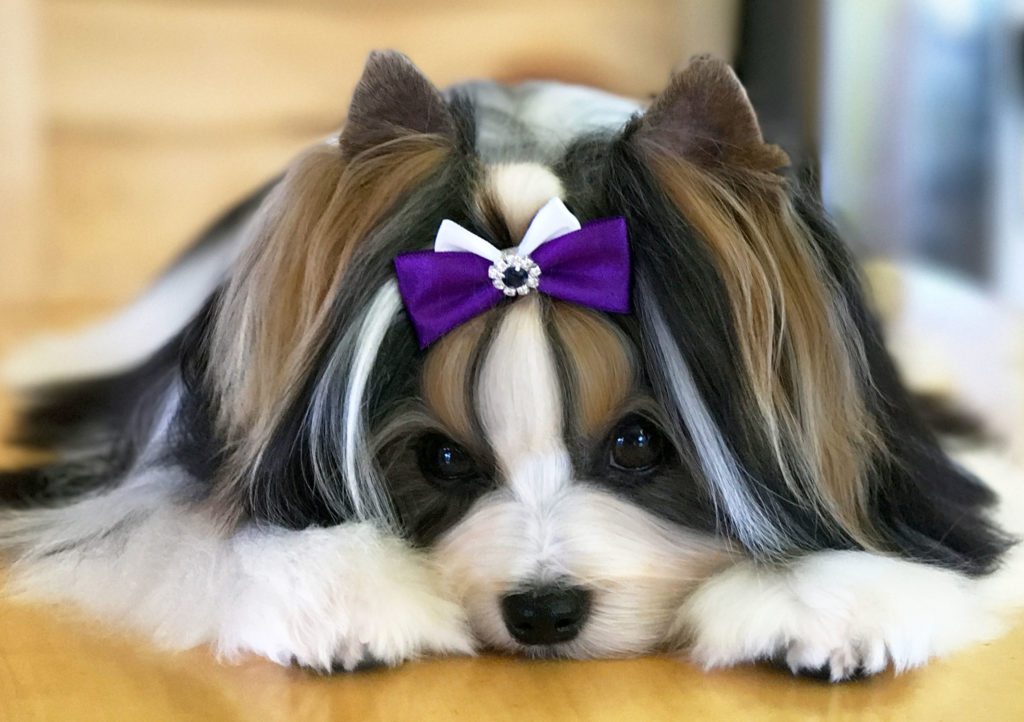 Importing foreign dogs instead of buying BTCA puppies caused plenty of drama within the BTCA. In July 2016 I resigned from my Committee Chair Position in the BTCA and Jared & I left the parent club.

All breeders make choices before they breed. We look at our dogs, at the dogs that are out in the show ring, at dogs from other breeders, at dogs from around the world, and read and reread the standard. Then look at those dogs critically in comparison to the standard. Then you make a plan regarding where you want your breeding program to go, what your goals are, determine what genes or lines you need to improve on the dogs you have. Or, in some cases, get different dogs to begin your breeding program. One of those choices is where to get your breeding stock, which pedigrees will assist you in getting to your goals, and which lines you want to avoid. There are many breeders in the USA making these decisions all the time. It is a personal preference and personal goals. The quality of the Biewer in the USA has improved over the years and will continue to do so. The number of Biewer breeders continues to grow. And as new breeders come in they will make their short-term and long-term breeding goals and then acquire the best dogs they can, from wherever they believe will move their goals forward (imports or American bred), and continue to breed dogs to the standard. It comes down to what are your goals and what do you need to do to reach those goals