Lynn Meyer’s application to become a member of the Biewer Terrier Club of America was denied. Reason sited was “adherence to the standard and code of ethics is of utmost importance”.
We think our dogs totally adhere to the standard! No, they aren’t perfect and no dog is, but we’ve had our fair share of success so far: “Donny” Irish Jazz Dzhaga Dzhaga CM2 made over 32 AKC points (equal to 2 Championships) in just a few weeks. He has 8 BIS wins and he won the BTCA sponsored 2018 Specialty Show in Orlando and he won BOB on all 3 FSS events in Orlando in December 2017. Rocky Mountain’s Sir Remington received his Certificate of Merit (16 AKC points) in just 6 weeks of showing. He won multiple shows with AKC and also finished as UKC Champion before his first birthday.
The Biewer Terrier is a new breed and we are looking to improve on what we have. As far as code of ethics, if you know Lynn Meyer, this should really not be any question.

“If the Biewer Terrier Club of America wishes to pursue full AKC recognition they really need to run their club professionally and not like some high school social clique.” We felt Lynn Meyer had a lot to offer to this club in terms of experience and knowledge. She has at least 35 years of experience in purebred dogs, has been members of American Pomeranian Club, Tibetan Terrier Club Of America, Dog Handlers Guild, and she is an AKC Breeder Of Merit. Lynn has been showing dogs in Westminister every year since she was 14 years old.

“I have gotten into a new breed that I have had great joy and continued success in showing and made great friends along the way. So many wonderful people in it. However, there are a few toxic people in the breed and seems more so than any I have observed in horses and other dog breeds. I get differences of opinion on emotional topics like our beloved dogs and handle conflict well and roll with it. Wel, the continued drama, pettiness and a few people in the breed association made it more challenging than even the strongest person can take. It sucks your joy and you realize that it is not for the betterment of the breed but for some misguided notion that bullying others is the way you do business. I saw it happen to others and stood up for them. Then when myself and my owners were bullied and targeted for an ad for our win in the Best in Show the first day of the sponsored show by the club (on top of the dog allegations that this 8 time BIS winner has brown on its coat nope it was his skin, you do the hair bow wrong, how come you win and I don’t it must be because of politics) enough is enough. I support the Biewer and ALL clubs. I am tired of the drama of BTCA (not the membership as a whole) and I hope in the upcoming elections you elect good steady well-versed people who are in it for the betterment of the breed and not their agenda or dreams of past glory. I feel free to have resigned from the club today which I did voluntarily as I cannot take this continued negativity and drama from a few that ruin it for so many before me (as noted in many many posts of others) and the current members. I wish the club well. The well-intentioned members will need the luck. I enjoy a great reputation in the dog world and I just want to have fun and show my dogs. Sorry, I tried to hang and help out, but it feels so good to be out! No more of the toxicity of a few to ruin my happiness in our wins and are very very nice dogs. Thanks, Michele”

Theresa Tafoya also resigned from the Biewer Terrier Club of America just recently. Theresa has been showing for 15 years. She’s a top owner-handler and has bred countless champions and shown or bred many nationally ranked Top Ten ranked Poms. “Team Donny” advertised Donny’s Orlando BIS win in the December edition of the Canine Chronicle Magazine.
The president of the Biewer Terrier Club of America emailed Michele and Theresa about their advertisement:

I am addressing you jointly as co-owners of the dog Donny.

I just received a copy of this ad along with several negative comments and quite a few complaints from members. The ad is not keeping with the standard of the BTCA and is showing the wrong head fall. This has been deemed as appearing to be correct and has been suggested that it gives the wrong impression to the judges. There is also a very blatant error in the wording, this is not the first Specialty held by the BTCA in Orlando, this happens to be the third in Orlando and the 13th overall. Please make any corrections necessary. This is not in keeping with the rules of the BTCA. 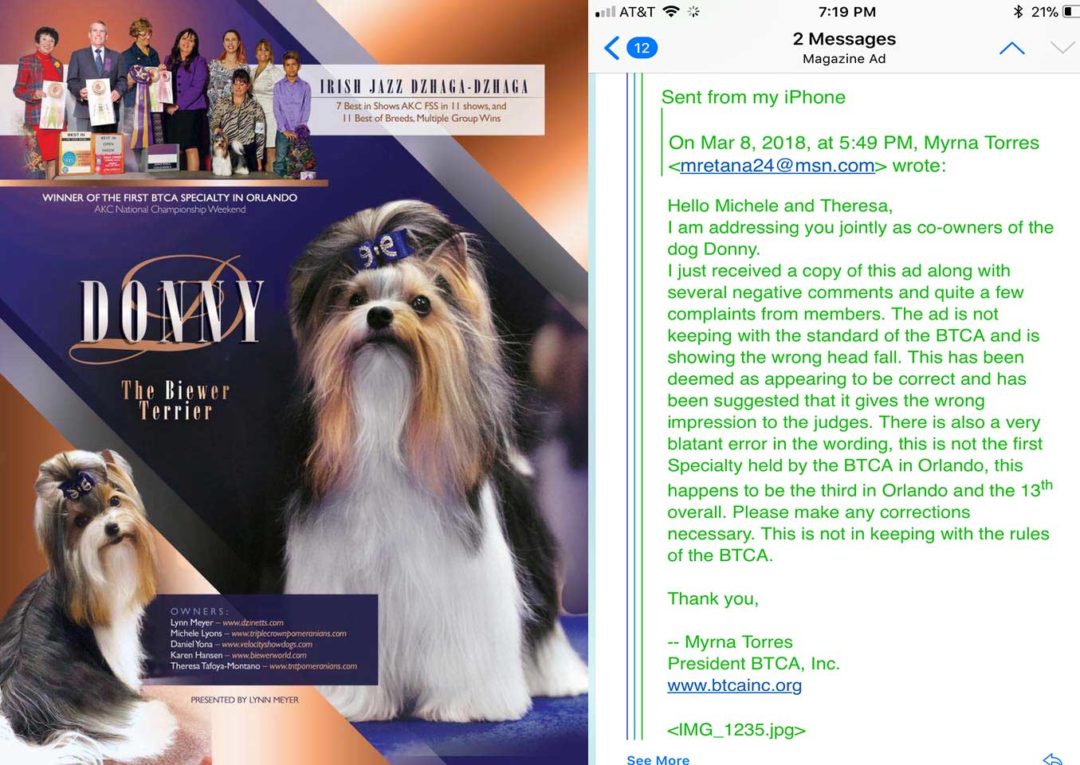 Rocky Mountain Biewer Terriers left the BTCA having resigned their memberships in 2016. We felt that the club was being run down by the unprofessional conduct of its Officers who seemed to prefer to bash their members rather than build confidence and support. An AKC Parent Club has a duty not only to its breed, but also to the members which support the club. The Biewer Terrier deserves to have a fair-minded representation within the AKC format, and we feel at this time that the BTCA is not fulfilling that role. The BTCA has a 10-year history of conflict, civil suits, suspensions, and the original club was dissolved because of all these issues in 2010. The new club reformed seems to not have learned from the prior bad behaviors and is in danger of repeating its own mistakes. We think the club could be vastly improved with open communications, meetings and perhaps a turn-over of Board positions to new faces with fresh ideas.