Once in a while, (including today), I get a comment like “Why do you even show your Biewers in AKC if they are not yet fully accepted?”
Well, let me tell you … Biewers show in the Miscellaneous Group in AKC. They are not in one of the 7 groups (Toy, Herding, Sporting, Non-Sporting, Hound, Terrier, Working) but they will be moved into the toy group once they are fully accepted. It takes 15 points to become an AKC Champion. Dogs that show in the Miscellaneous Group cannot earn Champion Points and therefore cannot become an AKC Champion. They get Certificate of Merit Points. So even though Milo has like 46 AKC CM points, he is not an AKC Champion. If the breed would be moved into the toy group tomorrow, all his points would be gone and he would start at zero and need to earn 15 AKC points towards the real Championship.

So why even show Biewers in AKC? Why not wait until they move into the Toy Group? For me, the most interesting thing is to see other dogs, even other breeds, and to learn. There are things that apply to all dogs, no matter how small or big or hairy they are. There is a phenomenon called “Kennel Blindness” … you just think your puppy is perfect and will be the most amazing show dog and 3 months later you realize that the dog may be very cute or beautiful but that he is high in the rear or that his front feet point to east & west like ballerina feet, or that it doesn’t actually have a neck and looks like the head is screwed into the shoulders, or that the bite went off, just a little bit but still off and so on. There are so many things that can go wrong and you keep telling yourself excuses why you should still keep the dog for your breeding program.

At a dog show, you actually get to be in touch with other dog professionals, handlers, and judges. So you start looking and comparing and getting opinions and all a sudden you realize what weak pasterns are or what a narrow rear means or how a dog should actually gait in the ring. You see the judge check your dog’s elbows and shoulders you wonder why he is doing that and you can actually ask and find out. There is so much to learn. It doesn’t matter that Biewers can’t be titled as Champions right now. They are in the Miscellaneous Group for a reason. The breed is in development and there is a lot to learn. Really! If you can, go to a dog show and look at some well-bred dogs. Find out what matters and what has priority. 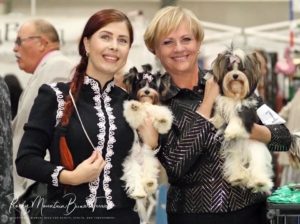 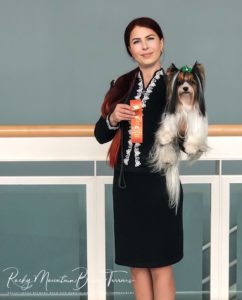 I learned so much just taking pictures of dogs at shows. I was never able to go to dog shows until last year because I was home caring for our dogs. So we hired handers to get the dogs out into the ring. But we made it work so I could go to AKC shows last year, all summer long, and then also to the AKC National Championship in Orlando in December. I know there is a lot of craziness going on at dog shows too, politics, bitching, poor losers, or just people who have never bred a dog, preferring to buy a nice one, show it, win and brag about it and then sell it.

If you breed dogs or plan to breed, you should go to dog shows and learn as much as you can. It doesn’t have to be just Biewers, go out and watch other breeds too, including short-coated dogs, and you will be able to see things so much more clearly. Learn for the sake of bettering your breeding program and improving the Biewer breed.