The Colors of the Biewer Terrier 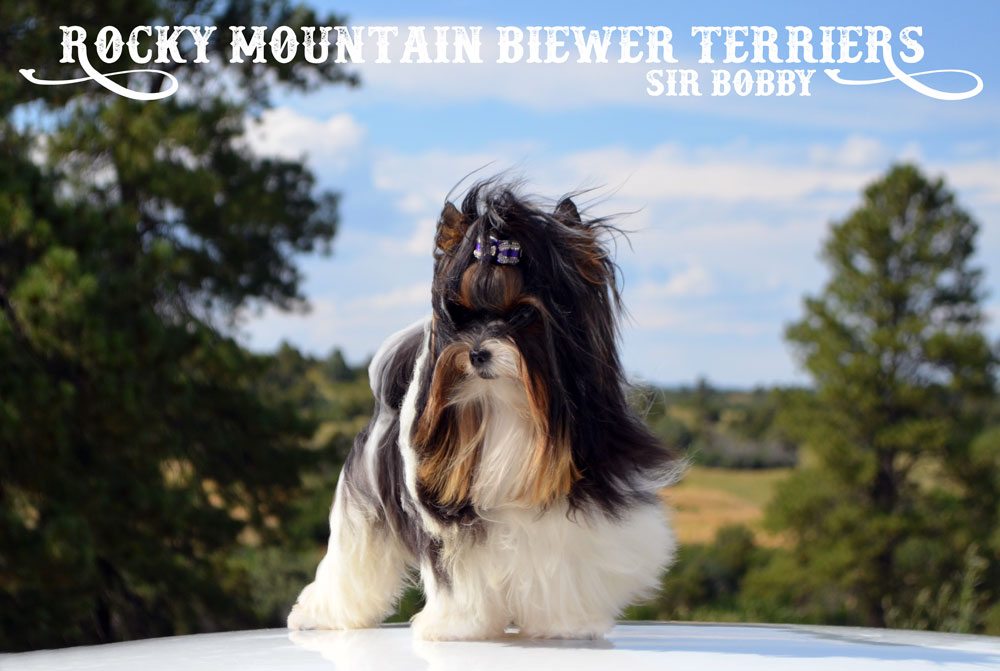 (A recessive mutation in the melanophilin gene was identified as the cause of color dilution.
Two variants are described:
the dominant full color (D) and the recessive dilute (d). Two copies of dilute gene will lighten black coat of the Biewer Terrier to a blue coat also called grey.)

(There are two alleles: the dominant full color (B) and the recessive brown (b). Two copies of brown are needed to dilute black pigment to brown. It will change the color of hair, nose and foot pads from black or any other black pigments to brown if two brown alleles are present.) 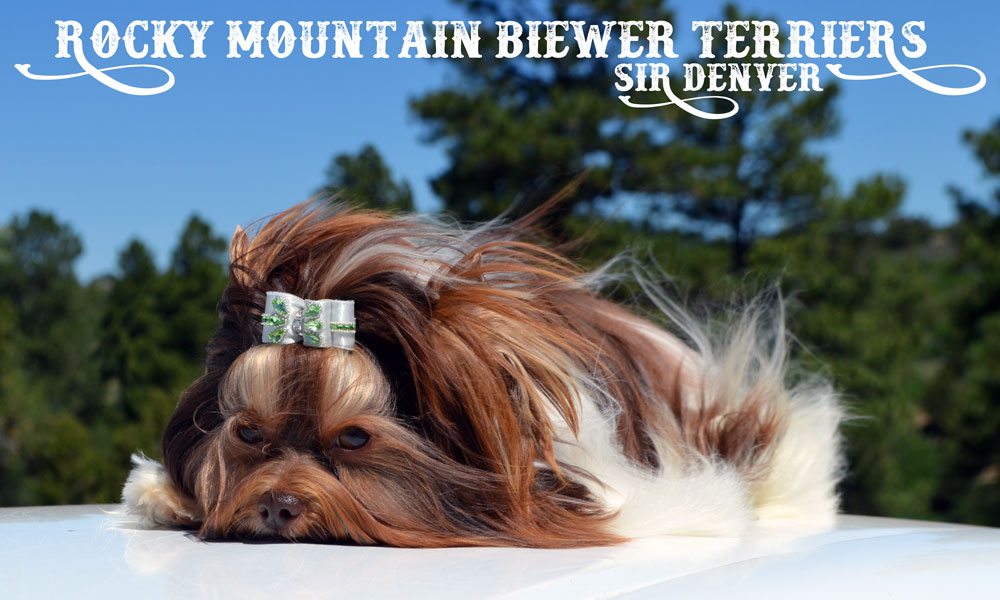 The mutation of Cream colored Biewer Terrier is, that eumelanin (black-brown pigment) is formed, but not embedded in the coat, so that only the phaeomelanin (red-yellow pigment) is visible as a gold tone on the the pigmented parts. If you bathe a cream-white Biewer terrier you can see the yellow patches on its skin. The coat usually appears white in adult dogs.

(The dominant form of the gene, the “E” allele, allows the dog to produce eumelanin, which is a black pigment. A mutation in the MC1R gene causes the pigment-producing cells to only produce phaeomelanin, turning all eumelanin in the coat to phaeomelanin. This form of the gene is represented as the “e” allele. The “e” allele is recessive, meaning that a dog must have two copies of the MC1R mutation to express the cream/yellow coat color.)
We do believe that the Cream-White Colored Biewer Terrier is also a Tri-Colored dog. The cream colored markings on the back appear almost white but all Cream-White Biewer Terriers show a darker orange/tan colors around the ears. Just like the Standard Biewer Terrier and the Chocolate Biewer Terrier. 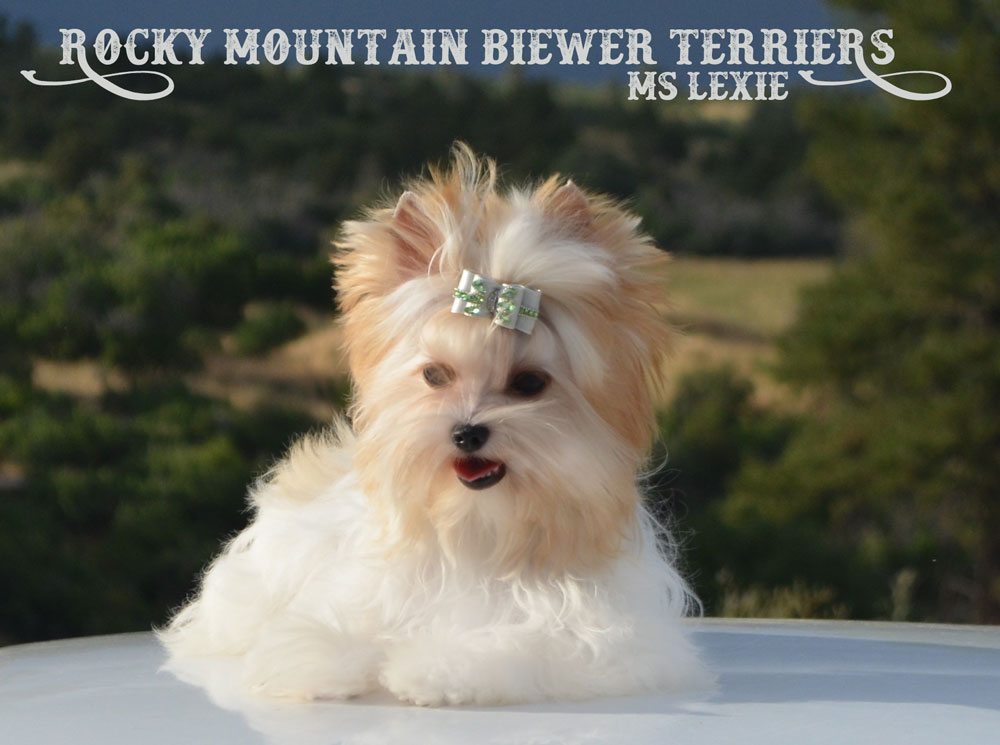 The chocolate gene and the cream gene are very common in the Biewer Terrier. It takes 2 of copies of the color gene to change the actual coat or skin color. Many of our Biewer Terriers do carry only one copy of a color gene and if the dog has not been tested for inherited coat colors, we won’t know about them until a non standard colored Biewer Terrier Puppy appears in our litter 🙂

Here are a few examples of other colors and variations that are not as common but they are possible.

It is possible for a Biewer Terrier to have a cream-white colored coat just like Ms Lexie on the picture above and a chocolate colored nose, just like Sir Denver the Chocolate Biewer Terrier. The “Cream Gene” is more dominant then the “Chocolate Gene”. The brown allele would not dilute the hair color, because the cream gene is more dominant, but will change the color of nose and foot pads from black to brown if two brown alleles are present (bb).

Example: The sire of a litter is a Standard Colored Biewer Terrier, just like Sir Durango, but that carries 1 copy of Chocolate Gene (Bb) and 1 copy of Cream Gene (Ee) would be called a Cream/Chocolate carrier. If the dam of the litter also carries these 2 color genes, then it is possible that dam and sire each pass that one copy to some of their offspring. Some of the puppies in the litter could then have 2 copies of cream (which makes cream colored coat) and 2 copies of the chocolate gene (which makes a chocolate colored nose and pads)

The sable gene is the most dominant color gene of the Agouti Series. It only needs one copy of the gene to change the coat color of the dog. A sire or a dam that is standard colored and carries 1 copy of the sable gene (ay), can have sable colored puppies.  We have seen Sable colored Biewer Terriers in Europe and they are also called “Ocean Pearl” Biewer Yorkshire Terriers.
The sable colored puppies are usually born with a very dark golden coat. The sable coat lightens up very fast and only the very dark tips can tell that this puppy once had a very dark colored coat. 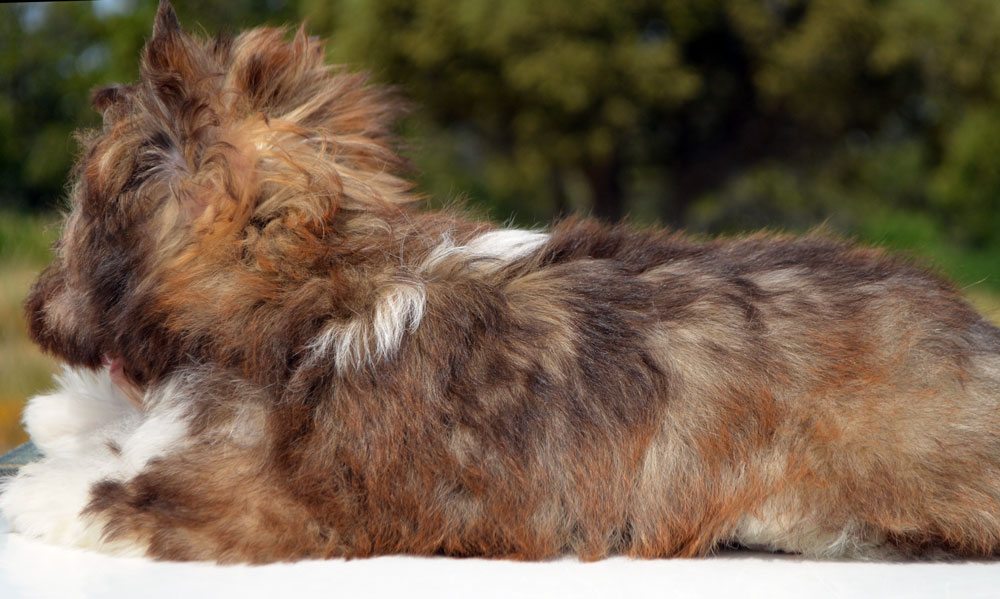 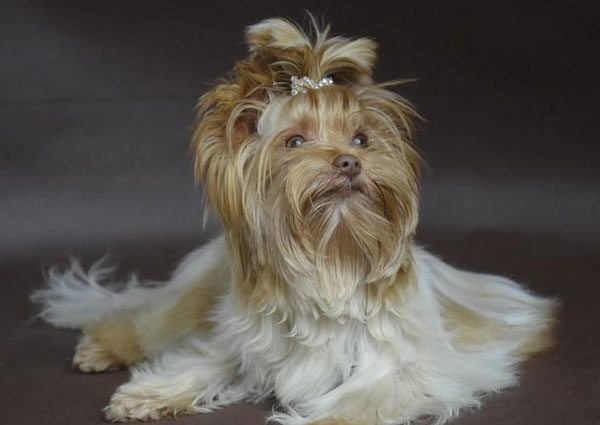