We translated this German Dog Magazine Article for you. It was written by Eva-Maria Kraemer and published in "Hundewelt" in 5/1986.

With mixed feelings, I traveled to the Hunsrück to visit one of the most successful German Yorkshire Terrier Kennels, where, I had heard that a large number of  Yorkies would be at home. Would a small pack of dogs attack me or will every animal be put in its cage?
Neither nor! No barking of dogs greeted me, no dog hair on the carpet, no dog-smell in the well-kept rooms of the house, which was situated by itself at the edge of the forest. "Where are the dogs?" Was my first question. Mr. Biewer laughed and said that the whole upper floor is reserved for the dogs. "How many are there?" Ther are about 60. Unbelievable! Meanwhile, a large glass hutch full of trophies and a whole wall covered with certificates and photos of beautiful Yorkshire Terriers caught my eye. "How many champions did you breed?" " Oh, I did not count them, but there are eight World Champions. The certificates for the International Champions are so big, we did not hang them all up." That was impressive, and behind this modesty, I thought, I could hear a little bit of pride.
How did you manage to get 60 dogs?
The Biewer's beloved Tibetan terrier died in the late 60's. The Biewers came across a photograph of singer Topsi Küppers, who had a small, fluffy dog in her arms."Was this a Tibetan Terrier?" Mr. Biewer just wrote to her and got an answer. This dog was a Yorkshire Terrier,  at that time still a rare breed, and it came from the famous Kennel of Mrs. Marx in Vienna. It did not take long and the Biewers were proud owners of one of those Austrian Yorkies. This little gnome delighted their life and it was obvious that he needed a companion. After all, there were four Yorkshire Terriers living in the family. Mr. Biewer was fortunate enough to be able to retire from his job career on his 50th birthday, which should be honored with a one-year world cruise, with the dogs, of course. But everything had to be called off because love canceled the plans! Larry unintentionally mated with the female, and now there was a puppy blessing in the house. Of course, that was more important than the trip around the world. Today, he says, what a blessing because his wife turned out to be unseaworthy on the short trip to England. The trip around the world would have become a disaster. The two dog lovers would never imagine what was to develop from the breeding because they did not expect how cute little Yorkie puppies are.
There was no question that these adorable puppies stayed with the Biewers! As a second litter was born, these puppies also stayed at home. So in a short time, a cheerful little pack lived at home with the Biewers. It was not a problem because in the meantime they had moved into the house in the Hunsrück, which was furnished quite dog-friendly, as I should find out soon. 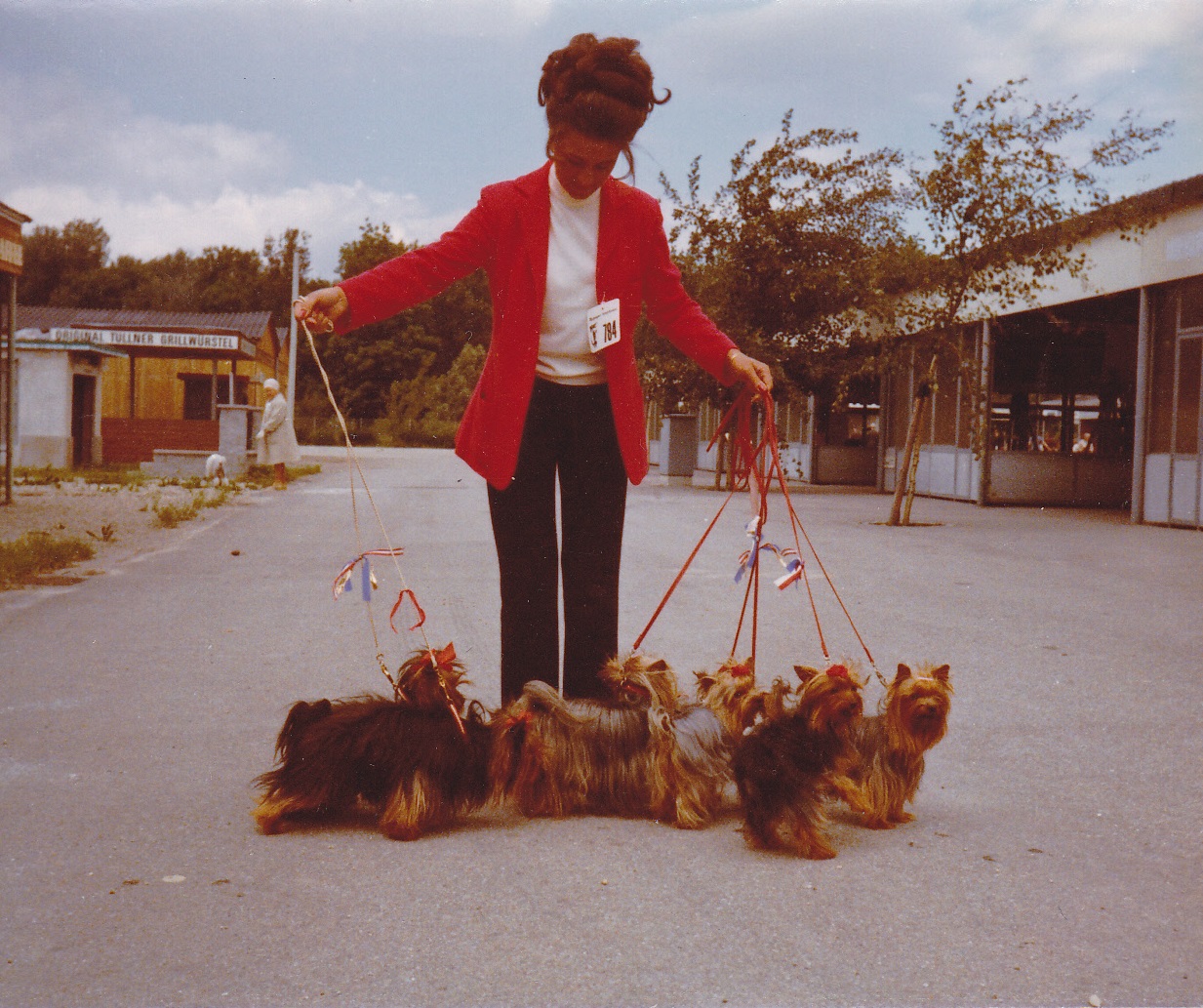 Full of enthusiasm for their dogs, Biewers also went to dog shows. The first litter already produced winners, and now the ambition was awakened. The two traveled all over Europe with their Yorkies and received many awards and Champion Titles. The Biewers are especially proud that all their dogs go back to their initial little breeding program. When you have achieved so much, the dog show thing gradually loses its appeal. Now the Biewers only rarely go to dog shows. In addition, they are busy with a very special event.
In 1982, for the first time, one of their bitches threw a white-marked puppy. What was that? Generations of  Yorkshire Terriers and no chance that the bitch could have been cheating.
The white-colored little dog fascinated the two and of course, it had to stay. Also with other females, the male Darling sired more white-marked puppies. These dogs were exceptional beautiful as adults and typical Yorkies with all desired breed characteristics. The Biewers were very excited about the event, that no one had ever experienced. Was it a mutation or a setback to the origin of the breed, to the times when little terriers were created by crossing them with other breeds? Nobody will be able to answer this question. However, the Biewers are so fascinated by their little snow-children that they have decided to breed them and to gain official recognition for the German Yorkshire Terrier a la Pom Pon. The name was coined by the singer Margot Eskens, happy owner of a white marked male. Now I almost could not stand the curiosity. I knew the Biewer's story, but I did not see a single dog! 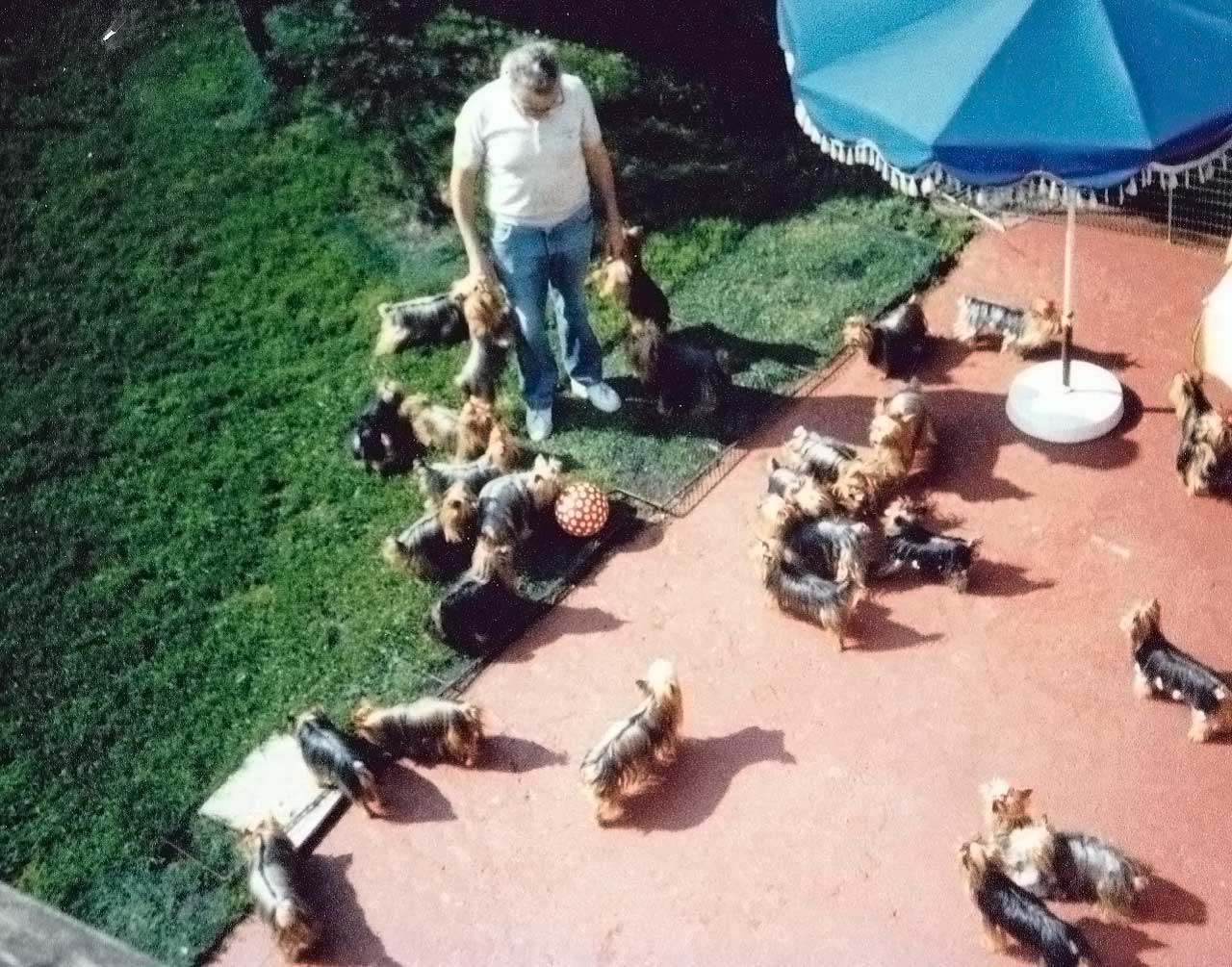 Young and old hang out together here because the old ones stayed in the house. Just last year a 14-year-old and a 16-year-old died, the first Yorkies. No wonder that such a pack has accumulated over time. All dogs are doing well, Mr. Biewer thinks he is probably the alpha dog, and the dogs do not argue with each other. We learned. that the wrapped dogs are males who easily get their coat wet when they potty. Yes, the hair of these dogs is very long, but it does not drag on the floor, because the Yorkies of the Biewers have a lot of space to move around, so the full coat, which is required for a show dog, wears out at the tips. Many breeders have their Show stars sit in cages with wrapped hair, so nothing gets onto the coat. This always bothered the Biewers. When they were still exhibiting, their show dogs were always wrapped but they never needed to live in cages. Of course, it was the white-marked dogs that immediately caught anyone's eye. I found them much prettier than the "normal" ones and can only wish the Biewers good luck with their breeding program.  If you visit Biewers and see the dogs, you only will want the white marked ones, "so I do not show them anymore ", says Mrs. Biewer. 14 white-marked puppies were born so far, unfortunately, most of them were males. Some of these were given to really close friends. The females and some males stayed at home. Horrendous prices have been offered for these puppies. The Biewers did not want that a new designer dog is marketed here.

The Biewer's Yorkies are healthy and natural dogs. They get a lot of exercise on the fresh air. Ramps have been built from the upper floor into the garden instead of stairs. So the whole crowd rushes like a storm wind from the terrace to the lawn, where everyone can play. Mr. Biewer also follows nature in feeding, feeding Irish beef. Meat, with a kibble that contains all the vitamins and minerals.
Is it possible to influence the body size of the Yorkies through nutrition? The Biewers say no. Well-fed puppies are bigger and stronger than small puppies, but the final size is the same. At six months, the dogs have reached their full shoulder hight. Of course, you should only give the small dogs vitamins and calcium very carefully, because overdoses can damage and can drive the bone growth artificially so that the Yorkie can get serious health problems. The Biewers breed with relatively small dogs. Both males and females around the four to six pounds. A breeding animal should weigh no more and no less.Here and there a dog becomes too big or too small, the majority of dogs have the ideal size because the size is hereditary. Biewers do not believe in breeding with very small males and relatively large bitches. You get more puppies per bitch, and the one who comes after the little father stays for the exhibition at the breeder. It is certainly more rewarding for the one who mainly breeds for sale. I know that large-scale breeding is criticized by many people. But it always depends on how! Here, all dogs live in the family and are carefully cared for. I have rarely seen such care with breeders who only have few breeding animals. These two people have built up a hobby, which is undoubtedly based on the love of the dog and they have dedicated their entire life to these little goblins.
[woocommerce_social_media_share_buttons] 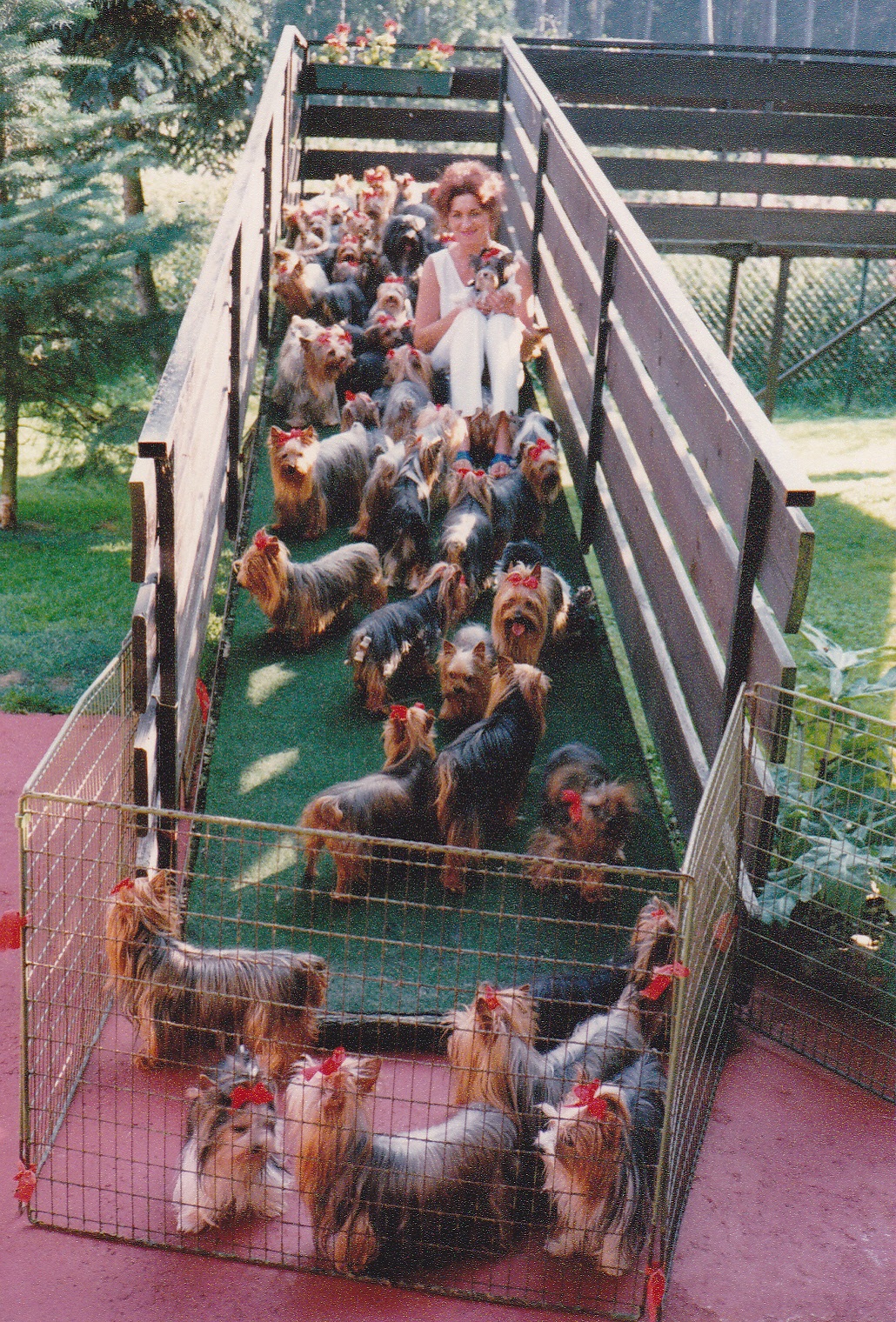